What Your 'No' Can Teach You About Trust and Boundaries

"No" might be one of the kindest and most powerful words we have in our vocabulary.

Whether you realize it or not, there’s a lot of power in the word “no”—and sometimes, we don’t take time to understand the intricacies and nuances that are packed in those two letters.

I didn’t realize this until a couple of things came into my worldview.

The first: The prevalent conversation of consent that is taking place in our culture right now thanks to the #MeToo movement. These conversations have reminded me that “no” is a human right, one worth defending when its disrespected, ignored, or used against someone.

Then, there’s the rise of “no” as everyday self-care. Whether it’s saying no to a get-together via Zoom, an additional meeting, or a new commitment—it’s a tool to protect our energy and time as a means of taking care of ourselves.

But oftentimes, it's easier said than done to exercise this everyday no. A tweet that came across my timeline is helping me work on it.

“My therapist told me that a ‘no’ means trust,” the tweet read. “It’s someone, whether friend or lover, trusting your decision to not go along with an idea or action. They should respect your decision and trust you.” 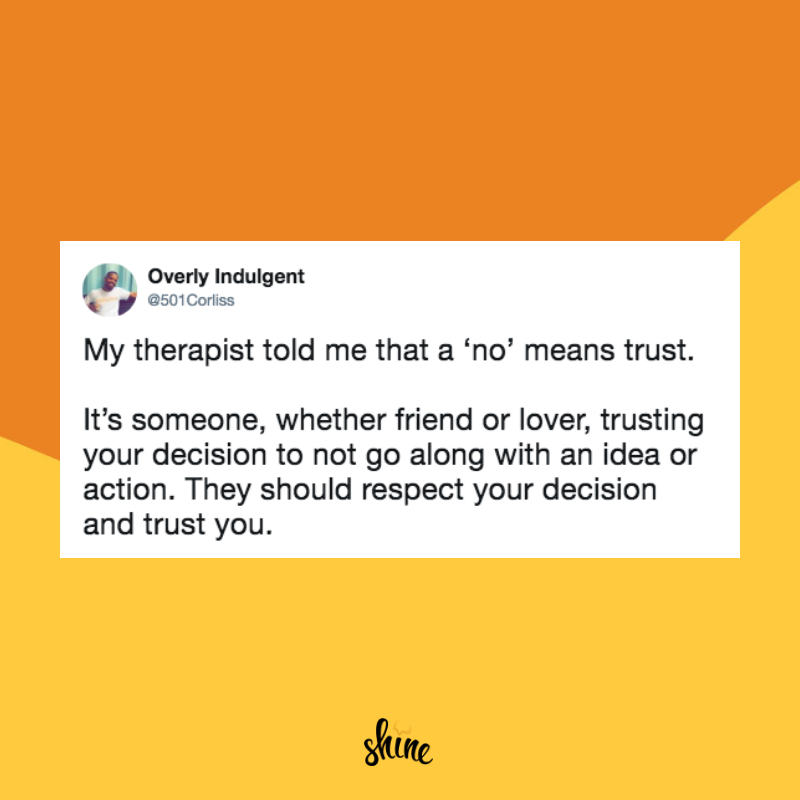 My mind began reeling. This whole time, “no,” a word with a singular definition in my life until then, was synonymous with the word “trust”? It didn’t make sense at first until I began digging deeper into why I felt so moved by “no” being associated with a positive characteristic like “trust.”

When we hear the word “no,” a lot goes on in our brains.

Because of the negative associations with the word, our brain releases “dozens of stress-producing hormones and neurotransmitters,” according to Andrew Newberg, M.D. and Mark Waldman at Psychology Today.

Studies show that our brain literally retreats when confronted with a “no” and is often slower to respond when we hear it. And, well, that makes sense.

The moments I have broken through and just asked a question at work or tried making plans with friends, and end up hearing a dreaded “no,” have often left me feeling dejected and anxious.

But instead of associating “no” with negative emotions, what if we embraced the idea of “no” similar to the tweet’s suggestions?

What if we take every “no” as a chance to actually trust that the person saying “no” has reasons for the boundaries they’re constructing?

Suddenly, when we think of “no” as an opportunity to trust another person, it allows us to inject a certain amount of compassion into a traditionally feared word.

When we think of 'no' as an opportunity to trust another person, it allows us to inject a certain amount of compassion into a traditionally feared word.

Now more than ever though, saying 'no' can be hard.

Because of the impacts of COVID-19, our lives have drastically shifted—and flexing a 'no' can be so hard for many of us, whether you are on the frontlines or practicing social distancing at home.

But despite the circumstances, there are still opportunities to set boundaries. If you are working from home, that might look like logging off intentionally at the end of a day instead of lingering and continuing to work.

Spending time offline is another way to set boundaries, and that might mean saying 'no' to Zoom calls or FaceTime conversations. As connected these experiences might feel, it can be taxing too. It's important to make sure you have time to recharge—and sometimes that means saying 'no.'

Deciding to look at the “no” moments in my life through this lens has been really transformative. Instead of fearing rejection in my relationships, and going through a cycle of anxiousness when a “no” finds its way to me, I take it as an opportunity to trust that that person is expressing their limits. A “no” is someone telling me they know themselves.

And, on the flip side, my “no” is me asking someone to trust me. It helps me uncover what I value—and when I ask someone to trust that, it says a lot about how much I value them. Using my "no" as a chance to show compassion towards myself has been empowering, and finding people who recognize that has been pretty neat, too.

When you feel the urge to say “no,” don’t ignore it! Take it as a chance to trust your own instincts and recognize that you’ve found a boundary that you’re not willing to cross.

What a cool feeling, huh?