Next Time You Feel Lonely, Try Leaning Into 'Positive Solitude'

In the summer of 2019, researchers from over 60 countries gathered at the International Positive Psychology Association’s 6th World Congress in Melbourne, Australia, to share cutting-edge insights on the science of wellbeing.

Their findings added depth and complexity to our understanding of the major keys to a flourishing life—and there were several insights presented at the World Congress that stood out to me as new or surprising.

The best part: They don’t require buying anything fancy or overhauling your life. You can start applying these techniques to your own life ASAP and see if they help you on your self-care journey.

Here are three of my favorite findings from the World Congress:

Researchers have repeatedly found that social connection is one of the keys to happiness. And for many of us, feeling separated from other people translates into a sense of loneliness and disconnection. But does solitude have to be a negative experience? Can time alone feed our well-being?

Researchers Martin Lynch, Sergey Ishanov, and Dmitry Leontiev at Russia’s National Research University Higher School of Economics have investigated the phenomenon of positive or “productive solitude,” in contrast with the more unpleasant experience of being alone.

Productive solitude doesn’t occur because we feel disconnected from others; it’s something that we deliberately seek out. Rather than being lonely or ruminating on negative experiences, we use the solitary time for contemplation, reflection, or creativity.

People who experience positive solitude tend to feel more positive emotions—in particular, the low-energy ones like relaxation and calm. According to research by Leontiev, when these people do find themselves alone, they have a greater sense of pleasure and meaning—and less of a sense of void.

People who experience positive solitude tend to feel more positive emotions—in particular, the low-energy ones like relaxation and calm.

What kind of people enjoy their alone time? Positive solitude seems to come more naturally to those who are more introverted or higher in emotional and psychological maturity.

What if you don’t have those traits? We might see more benefit in solitude if we deliberately schedule alone time for doing something we enjoy, for example, or spend our solitary time in the peaceful and welcoming setting of nature.

Future research may uncover other ways for all of us to cultivate new attitudes toward solitude so we can appreciate it more—and be happier for it.

One of the traditional surveys that researchers use to measure positive emotions includes a peculiar statement: “I feel active.” For researcher Sarah Pressman, that didn’t quite seem like a positive emotion—not the way other feelings like “grateful” or “happy” are—so she decided to investigate it further.

Past research would suggest that people who experience more positive emotions are healthier in various ways—for example, they have stronger immune systems, exercise more, have a lower risk of heart disease, and even live longer. But what role does feeling “active” play in our health and well-being?

In other words, it doesn’t just matter how physically active we are, but how active—how energetic, vigorous, and vital—we feel. That’s a psychological state that researchers should pay more attention to, Pressman believes.

It doesn’t just matter how physically active we are, but how active—how energetic, vigorous, and vital—we feel.

The little we know comes from the workplace, where studies have described the phenomenon of “relational energy”: how some people excite and energize us while others leave us drained and exhausted.

But what makes us feel active and how else is that beneficial? It remains to be determined who these energetic people are, and whether we can all get happier by boosting the pep in our step.

As we pursue happiness, we often ponder the future—and the kinds of things that will make us feel good tomorrow or next year. Even though our predictions aren’t always accurate, the simple act of contemplating the future might be a key to wellbeing.

According to social psychologist Roy Baumeister, happy and optimistic people tend to think about the future more often than their less-upbeat counterparts. Thinking about the future seems to come in two flavors: First, we dream big and imagine fantasy outcomes; then, we “get real” and come up with pragmatic plans.

Happy and optimistic people tend to think about the future more often than their less-upbeat counterparts.

Thinking about the future is useful personally and in our relationships. For example, research suggests that people whose minds tend to wander toward the future develop more concrete goals. And if you’re having a conflict with a romantic partner, looking at it from a future perspective—imagining how you would think about it one year from now—could lead to less blame, more forgiveness, and greater wellbeing in your relationship.

When the process of imagining positive futures (and how to bring them about) goes awry, we may be at risk of mental health issues.

Researchers have suggested that faulty future-mindedness—envisioning a darker future for yourself—contributes to depression, anxiety, and other disorders.

For this reason, perhaps, many popular therapies—such as future-oriented therapy, hope therapy, solution-focused therapy, and cognitive-behavioral therapy—help clients improve the way they think about the future.

If you want to improve your future-mindedness without therapy, another option is to journal about new doors that have opened or might open in your life.

A version of this article originally appeared on Greater Good Science Center.

Read next: How to Soothe Loneliness With Solitude 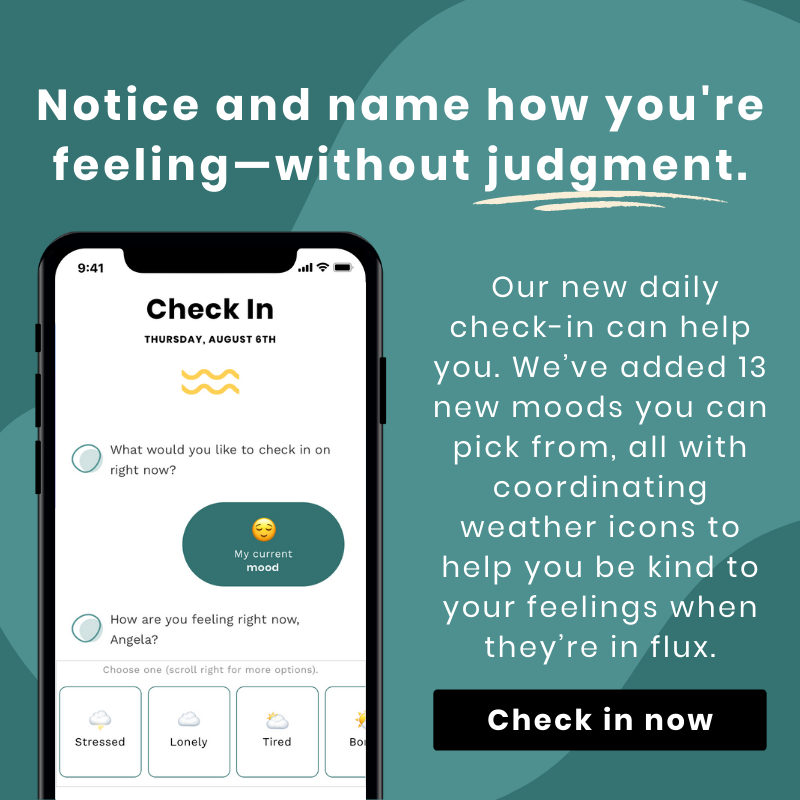 Kira M. Newman
Kira M. Newman writes, edits, and produces content for all of the Greater Good Science Center’s websites, from the magazine to Greater Good in Action to the Science of Happiness MOOC, for which she’s served as course assistant for three semesters. Offline, she is the creator of CaféHappy, a Toronto-based meetup that gathers monthly to discuss how to be happier. Kira comes to GGSC from the world of tech journalism, where she was published in outlets including Social Media Monthly and Tech.co. She spent four years traveling around the world and loves speaking French, swing dancing, and exploring local cafes. Follow her on Twitter!
Start your self-care ritual today
Listen to daily meditations and discuss how you’re practicing self-care with a supportive community.
Download now