"Could you not care about it?" This was the question a dear friend asked after I relayed that I was losing control of a work project I felt ownership over and had invested time and energy into. I stared blankly at him. I scoffed internally. In my head I said something along the lines of, "Is he out of his mind?"

But I didn't dismiss his question. Instead, I sat in silence, letting the question sink in, and I felt the tension in my shoulders lift as I toyed with an idea I hadn't remotely considered before: letting go.

Giving up is not a highly-valued skill. Have you ever read a job description that includes, "Willing to quit" in the list of qualities for an ideal candidate? Certainly perseverance and tenacity are important qualities. Without them, we wouldn't have the extensive body of knowledge that exists today, and we would likely fall into a state of learned helplessness. But it's too bad, I think, that we don't place greater value on having the wisdom to know when to persevere and when to move on, because persevering at the wrong time can have very real consequences.

It's hard to let things go, but it's always beneficial in the long run. Own your energy and practice with your Let Go of Being Right meditation featured in the 3 Days to Better Communication challenge, now in the Shine app. Here's a sneak peek:

How I Learned to Let Go A couple years ago, I inherited a program at work that had been limping along for years. It wasn't my highest priority, so I allowed it to keep limping along, despite clear evidence that it was ineffective. That meant a staff person still had to dedicate time and energy to it—and it ate up a good chunk of my budget. Eventually, I realized I had to let go. And when I finally pulled the plug, all I felt was relief.

Since shutting the program down, our resources have been put to far greater use, and the resentment that had been festering around the program is gone. If I were still trying to make it work, I would be exhausted, my staff would be fed up with the program and me, and we wouldn't have the resources to spend on worthier endeavors.

There won't always be black and white data to guide you in your choice to abandon something. But if you're struggling with a project, endeavor, or even a relationship, it's worth at least considering if letting go would resolve that problem for you.

Here are some considerations to help you:

1. Be Brutally Honest With Yourself What is it, really, that's got you wrapped up in a particular pursuit? If you're truly passionate and want to pursue a solution to a problem, more power to you. But if something else has you clinging to a project or idea like Rose to that wooden door in Titanic, perhaps it's time to loosen your grip. Maybe you don't want to admit failure or you're trying to avoid embarrassment. Maybe you're trying to make someone else happy. Maybe you really want something to be done right, therefore you want to do it.

As with the examples above, it’s likely your reason for hanging onto something comes down to fear. Fear is a devious shape-shifter that hides behind illusion and insecurity. Take for example, a fear of failure. Instead of thinking, "I'm terrified of failing," you may say to yourself, "I just have to push this through; I just need X, Y, or Z and then this will work." But you avoid a simple reality: If you fail, you won't be the first or last person to do so. Also, the important people in your life probably know you're struggling. Basically, you’re only fooling yourself. When you're honest about why you're holding onto something, you can view the situation more rationally and make decisions with greater clarity.

2. Recognize What's In (And Out Of) Your Control If it's entirely your time, energy, and money that are invested in something and you're enjoying the pursuit, there's no reason to throw in the proverbial towel. But if someone else has a hand in a situation you're holding onto, that changes things.

First, if you're not a decision-maker, you may be wasting precious personal resources trying to exert control. If you've made a good-faith effort for your cause (and documented your efforts) but the decision-maker isn't listening, then the final decision and subsequent consequences belongs to the decision maker. Quit trying to own the responsibility. I know it's easier said than done to leave something alone when you care about it, but consider this framework to help you set boundaries: Only worthy projects and people deserve your best. Don't give your best to someone who's just not interested.

Only worthy projects and people deserve your best.

In other situations, you may have more control. However, if you're trying to push an idea or a project forward and meeting resistance, maybe it's time to heed that resistance. Again, revisit your motivation for why you’re trying so hard. When you're honest with yourself, you also set yourself up to be more open and honest with others, so you can try to understand the resistance you're encountering. When you can listen without defensiveness, you can also trouble-shoot more creatively.

3. Imagine the Possibilities If You Let Go You've undoubtedly imagined all the ways things could go wrong if you walk away from something you’re wrestling with. Change your approach by imagining what your life might be like if you were to let go intentionally. Envision the benefits you may reap.

Let's say you've been going head to head with your boss over a project. You've been trying desperately to push a specific agenda, and he's pushing back. Imagine walking into his office and saying, "You know, I've been thinking about X, and perhaps we should follow your suggestion." How might he react? How might it impact your relationship? What would it mean for you if you no longer had to fight that battle?

Next, let your imagination wander farther than the initial conversation. What might the next week look like if you relinquished control? What might life be like in a month? Six months? Let your mind wander to the potential impact in all areas of your life—work, friendships, family, free time, weekends, etc.

Don't try to cram this into 30 seconds; give your imagination some time to do its job. It may take some effort to stay focused on possible benefits. Make the effort. As you allow yourself to imagine your "problem" in a new way, you may begin to recognize possibilities that you couldn't imagine when you were stuck in your "persistence" mindset.

4. Consult With Trusted Others In the situation I mentioned at the start of this piece, I called a trusted friend right after I realized how much peace the idea of letting go brought me. I could hear the relief in her voice as she reinforced my decision. She had watched me turn myself inside out over this particular situation and knew if I insisted on maintaining control, it was going to do me in. She basically told me to run as fast and as far as I could. Then I called my husband, who echoed her sentiments.

Sometimes our friends and loved ones can see perspectives to which we are blind. It was a friend who initially suggested letting go as he recognized the turmoil I was in. Another friend had also been concerned, and when I sought her counsel she gladly gave it, as did my spouse. It's important to note these are folks I trust to have my best interests at heart. When they all essentially said I should run like hell, I knew I needed to listen.

Someone in your inner circle has undoubtedly noticed your struggle. If they haven't already approached you to discuss their concern, you should probably seek them out. You may end up pleasantly surprised by their feedback or the solutions you discover through your conversation—solutions that you never would have reached alone.

Someone in your inner circle has undoubtedly noticed your struggle.

Remember, you can pursue all of the suggestions above as an experiment. You can be honest with yourself, let yourself visualize your life free of this struggle, or seek the counsel of your closest friends without being tied down to any particular option. Just explore, and see what happens. Perhaps nothing changes. Or, perhaps everything changes. The only thing you have to lose are the solutions that may save you time, money, and sanity.

Read next: How to Take the Stress out of Pressure 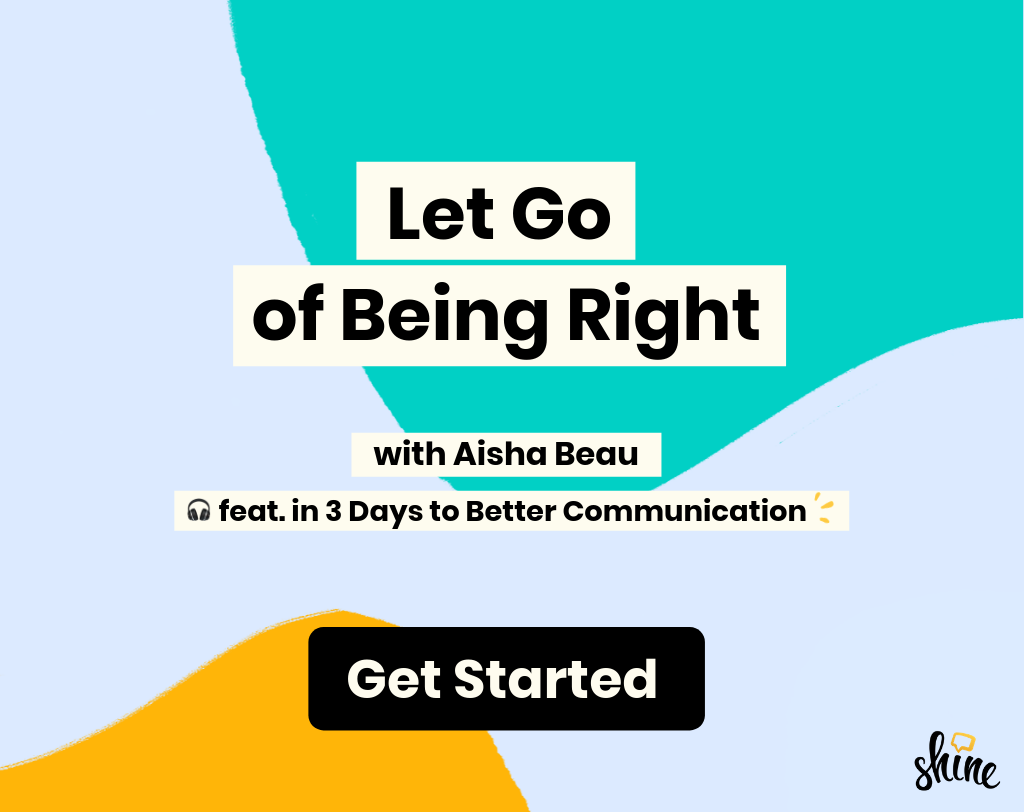 Caris Thetford
Caris Thetford is a licensed counselor who believes people can always learn, grow, and work towards their ideal life, even if their starting point in life was less than ideal. She works full-time in prevention, writes a regular career column for The Daily Muse, and has never turned down a cupcake. You can find her at www.career-well.com.
Start your self-care ritual today
Listen to daily meditations and discuss how you’re practicing self-care with a supportive community.
Download now