How to Harness the Power of a Personalized Mantra

It’s a line from the new Wonder Woman film—one that stuck with me long after the credits rolled. I won’t spoil the film, but Diana confidently declares these words when she comes face-to-face with an enemy. Her mission: To destroy him and protect the entire world from war and violence. (No, it's not your simple Monday to-do list task.)

In that pivotal moment of the movie, I can easily think of other things Diana could be thinking or saying: “I’m scared I can’t handle this,” “This task is too difficult,” “What if I fail?” They’re common phrases I turn to when I’m daunted by a new challenge. But Diana doesn’t go there. Instead, she silences those little voices and focuses her mind on one thing: Her confidence and her self-belief that she can accomplish her goal.

Whether Wonder Woman knows it or not (Themyscira is slightly removed from the rest of the modern world), she’s harnessing the power of self-affirmations—and that’s something us mere mortals can do, too.

The Power of Personalized Affirmations For most people, the word “self-affirmation” might conjure up an image of an Instagram post with the words “Keep calm and carry on". Yes, that’s one example of an affirmation or mantra—and if it encourages you, that’s great. But affirmations can pack an extra punch when they’re connected to our personal values and experiences.

“The most powerful affirmations are those that tie into some belief you have that’s driven by an experience,” says Anna Rowley, Ph.D., a psychologist and performance consultant as well as the co-founder of RallyBright, a startup that helps millennials become more resilient. “You’re more likely to reduce the crook in your negative thinking and accomplish what you want to do if your affirmations are organic.”

The most powerful affirmations are those that tie into some belief you have that’s driven by an experience.

Tapping into our values creates something called “committed action,” which is where affirmations get their power.

“You’re more likely to follow through on a promise or a behavior or accomplish a goal if the action relates to a value or belief you hold about yourself or you hold about the world,” says Rowley. “If you activate a person’s values, you get a committed action.”

Wonder Woman’s affirmation does just this: She makes her words personal by literally stating her name:

“I am Diana of Themyscira, daughter of Hippolyta, Queen of the Amazons.”

Then, she activates the values that motivate her: Fighting for peace and goodness in the world.

“In the name of all that is good, your wrath upon this world is over.”

And she’s not the only leading lady who uses a personal affirmation to get the job done. In Disney’s latest animated film, Moana, Moana sets off across the ocean to find a missing demigod and save her family’s island (again, not your typical daily task). Along the way, she repeats to herself who she is and what she intends to do: “I am Moana of Motunui. I will board my boat, I will sail across the sea and restore the heart of Te Fiti.”

Rowley says these heroines have spot-on affirmations. “Neither of their affirmations are outside of them,” she says. “They’re saying, ‘This is me. I’m very grounded and purposeful. I’m very directed, and this is something I can do. It might be hard or painful and it might take a while, but if I stick to this I can find myself accomplishing it.’”

How to Find Your Power Phrase

So, how do you develop our own personal—and powerful—mantra? Rowley suggests following these steps:

1. Think of What You Want to Accomplish

First, pinpoint your goal and call out exactly what you want to accomplish. In Moana’s case: “I will board my boat, I will sail across the sea and restore the heart of Te Fiti.” But maybe in your case: “I will nail this presentation at work” or “I will be more at peace with my anxiety.”

2. Write Down How You’ll Feel When You Accomplish That Goal Picture yourself in the moment you conquer your goal. How will you feel? Grounded? Confident? Calm? In Wonder Woman’s case, I’d guess confident, powerful, and like an overall badass. Write down the words that connect with how you want to feel.

“From those descriptions, take the words that you find powerful and try to put them into a short phrase or sentence,” Rowley says. It helps to write the words out on notecards and then arrange them into a phrase. Rowley recommends keeping your affirmation to just five to nine words—this will make it easier to remember.

My new personal affirmation: “I am Haley of Michigan. I am resilient, creative, and optimistic.”

3. Connect Your Affirmation to a Previous Experience

Once you have your short power phrase, it’s time to connect the affirmation back to an experience you’ve already had where you demonstrated those qualities. For my example: I thought of a time in college where I clearly showed my resilience, creativity, and optimism.

“There have been times where you’ve been strong or grounded or engaged with a really tough situation,” Rowley says. “Go back and think of those real situations and link your affirmation to something that’s very real.”

This exercise makes your affirmation something you’ve already lived—it becomes a reminder of your strength rather than something you're just telling yourself to do.

4. Pair Your Affirmation With a Photo The reason why affirmations on Instagram can feel extra compelling: They're typically linked with a powerful photo. It's helpful to do this with your personal affirmation, too—it makes it easier to recall. “Having your affirmation typed or written on a picture of you or a picture that means a lot to you is one of the most profoundly significant ways to get people to own that affirmation,” Rowley says.

Looking at your affirmation can really ground you and remind you of all the things you have to bring.

Use a free app like Canva or Typorama to match your affirmation with a powerful photo. In Wonder Woman’s case: I’d imagine her mantra would pair well with a photo of her training with Antiope. For Moana: a picture of her family and fellow islanders.

I paired my affirmation with a photo I took on a recent summer night in Brooklyn. That night, looking out over the East River at Manhattan, I felt confident with where I am in my life and what I'm doing. It's a photo that centers me—and it's even more powerful when it's paired with my affirmation. Here's what it looks like: 4. Use Your Affirmation Regularly

The final step: Make your affirmation a habit. “Make it part of a daily meditation,” Rowley says. “It can make you more mindful as to how you’re living your life.” Rowley suggests making your affirmation your phone background so you see it regularly. This will also make it easier to turn to your affirmation when you need it the most.

When facing a challenge, that’s the time to speak to—and trust—your power rather than entertain self-doubt.

“Let’s say you have to talk to your boss about a pay raise or about a project or something that’s troubling you,” Rowley says. “Looking at that picture or affirmation can really ground you and remind you of all the things you have to bring. That sets you up for a greater likelihood of success.”

Speak to Your Strength

If Wonder Woman taught me anything (besides the fact that we need 100 more superhero movies with ladies at the helm!), it’s this: When facing a challenge, that’s the time to speak to—and trust—your power rather than entertain self-doubt.

We all have a track record of showing strength in the face of adversity. The more we can remind ourselves of our power, the better we can face whatever life throws at us next—whether it’s the God Ares, a missing demigod, or that tough conversation we need to have with a friend. As Wonder Woman says in the movie, “It's about what you believe.” Affirmations help us believe in ourselves. 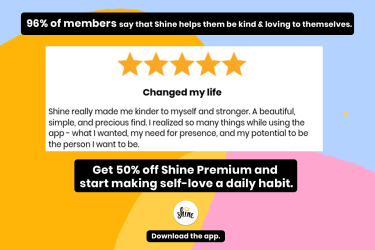