Fighting Our Negative Emotions Does More Harm Than Good

When I’m overwhelmed, I often find myself telling anyone who’ll listen, “I’m so stressed. In fact, I’m stressed about being stressed.”

Recognizing our emotions is typically a good thing, but when it comes to dealing with everyday negative emotions—like sadness, loneliness, and anxiety—that awareness can often lead to self-criticism (aka my “stress about stress” scenario). We can be harsh on ourselves for not feeling happy 24⁄7, and a recent study shows that judging ourselves for experiencing distressing—yet totally common—feelings only makes things worse.

We often criticize ourselves if we don't feel happy 24/7—but we shouldn't.

Researchers at the University of California, Berkeley published a study last month in the Journal of Personality and Social Psychology that looks into what they call “habitual acceptance.” The study’s authors define the term as the degree in which people tend to “accept their emotions and thoughts without judging them.”

“People who accept [negative] emotions without judging or trying to change them are able to cope with their stress more successfully,” the study’s lead author, Brett Ford, an assistant professor of psychology at the University of Toronto, told Berkeley News.

It might sound counterintuitive, but if we accept our negative emotions, we actually create a greater and healthier change—without pressuring ourselves to change at all.

“Acceptance represents somewhat of a paradox—it is effective at helping individuals change their emotions, and yet it is done without the intention to change emotions,” the study’s authors wrote.

Acceptance is seeing uncomfortable and bad emotions as something that we all experience, and therefore not something to fight against. But getting comfortable with all your emotions—the good, the bad, and the stressful—is easier said than done.

Emotional acceptance is something we all could use a bit of help with. Here, four tactics that can help: If you feel guilty or have difficulty letting yourself feel anything other than happy, you’re far from alone. In a 2013 essay for Scientific American, psychotherapist Tori Rodriguez writes that she recently noticed an increase in patients feeling ashamed or guilty for experiencing negative feelings. Her hypothesis why: Our culture’s obsession with optimism.

“Such reactions undoubtedly stem from our culture’s overriding bias toward positive thinking,” she explains in her essay. “Although positive emotions are worth cultivating, problems arise when people start believing that they must be upbeat all the time. In fact, anger and sadness are an important part of life.”

Rodriguez tells her patients to practice feeling negative emotions without rushing to change them. To do this, she suggests they imagine negative feelings as “floating clouds” that will pass, journal about their feelings, or talk them out with another person or a professional.

It’s also helpful to remember that feelings are never permanent—it’s a perspective shift that can make distressing feelings less powerful. “I often tell my clients that a thought is just a thought and a feeling just a feeling, nothing more,” Rodriguez writes. Mindfulness exercises can also help you stay in the present moment without passing judgement on how you’re feeling.

While a quick Google search will lead you to countless exercises and practices, the Mayo Clinic offers a few tips on general mindfulness guidelines: Pay attention, focus on your breathing, and awaken your senses. Try looking at something familiar, say a coffee cup or a cell phone, with a different set of eyes. What detail have you never noticed in the object before? By tuning in to these details, you can become more aware and mindful of your surroundings and less focused on distressing feelings.

3. See Negative Emotions As Part of the Process When we avoid negative emotions—or refuse to accept them—we place limits on ourselves. Whenever we tackle something new or challenging in life, we’re bound to brush up against some negative emotions.

“Setting important goals and pursuits in your life may inherently involve going through some challenging times and situations,” Noam Shpancer, Ph.D., a clinical psychologist and professor of psychology at Otterbein College, explains in an essay for Psychology Today. When you avoid any not-so-great feels, you limit how far you can go. On top of that, you might create negative feelings simply by dreading negative feelings. “The fear of the impending negative experience becomes a negative experience in itself,” Shpancer writes.

Whenever we tackle something new or challenging in life, we’re bound to brush up against some negative emotions.

4. Notice Where You Are in the 'Change Triangle'

Hilary Jacobs Hendel, L.C.S.W., swears by a handy graphic that can help you notice how you might be fighting a negative emotion.

"It’s simply the best tool I’ve come across to help people understand the effects of burying emotions and to teach how to use emotions the way nature intended, as a compass for living," Hendel writes on Psychology Today.

There are three sides to the triangle, and they represent the following three states you could be in:

●︎ Defenses: Taking steps to avoid your feelings—like distracting yourself with screen time, joking or being sarcastic about how you're feeling, or burying yourself in another task to avoid embracing how you feel.

●︎ Core emotions: Embracing how you're actually feeling. According to Hendel, the core emotions are sadness, fear, anger, joy, excitement, sexual excitement, and disgust. And while they may feel uncomfortable or overwhelming, Hendel says they exist to inform us about our environment. "Core emotions are brilliant: if we get out of their way, their innate programming tells us what to do to live life adaptively."

Notice where you might be in the Change Triangle, and do what you can to move yourself into a space where you're embracing the core emotion you're feeling. Once you do embrace that emotion, Hendel says you get to unlock that area below the triangle.

"The state below The Change Triangle is accessed by 'listening' to what the core emotion of the moment is telling us," she writes. "By honoring what it says and by letting the associated body sensations move through freely until they naturally subside. Core emotions are wavelike in nature: rising then ebbing."

Adversity and negative emotions might seem and feel scary, but they’re part of the journey to reach an end goal. The next time you’re about to criticize your feelings (“Why am I so anxious right now?!"), recognize that how you react to adversity is a choice. Accept your feelings, and you’ll actually avoid the stress that comes from avoidance.

In the future, I plan on reframing my “I’m stressed about being stressed” into “I’m so stressed, but that’s okay.” I’m only human after all. 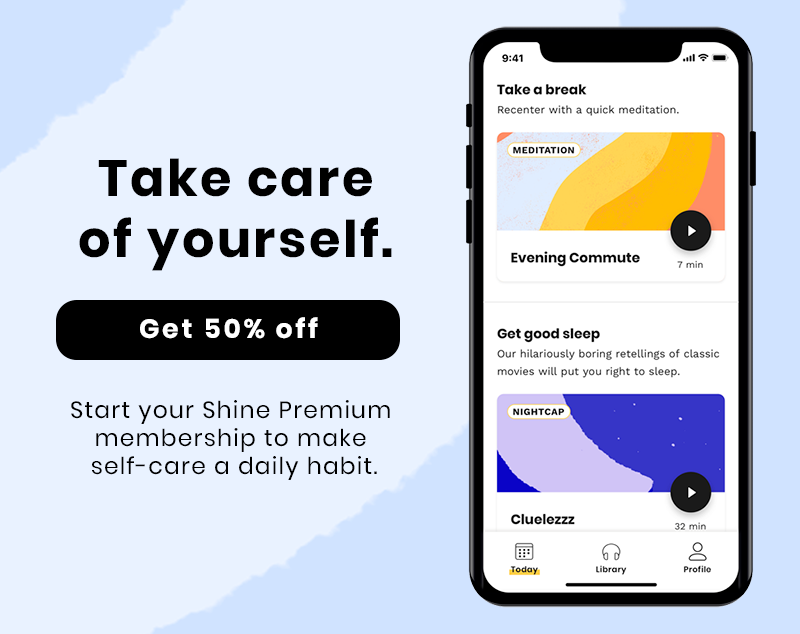