A Week in My Life With an Invisible Illness

It’s a comment I hear often when I tell someone I suffer from a life-threatening illness.

But because I look “normal” physically, most people assume I live a normal life.

Like my peers, I grew up with the characters of Harry Potter (shoutout to all my fellow Gryffindors), struggled in school (mainly in math) and bickered all the time with my younger brother when we were kids.

But the one thing that isn’t “normal” about my life is my health.

I was three months old when I was diagnosed with sickle cell, which is a genetic blood disorder that is caused by the production of abnormal hemoglobin. This abnormality causes the red blood cells, which are normally circular, to take on the shape of sickles—think crescent moons.

What it means: Unpredictable episodes of pain called “‘crises.” “These occur when sickle-shaped red blood cells get stuck inside blood vessels and block the blood flow to the chest, abdomen, joints, and bones,” explains Sickle Cell Anemia News. “These periods of pain can last anywhere from a few hours and a few weeks.”

Sickle cell is an invisible illness, a term for any medical condition that isn’t visible externally.

It means I’m part of the 10% of Americans who have a condition that can be classified as an invisible disability, according to Disabled World. “96% of people with chronic medical conditions live with a condition that is invisible.”

If you’re like me and struggle with an invisible illness then I want you to know that you’re not alone. There are people out there that know exactly what you’re going through.

If you’re like me and struggle with an invisible illness then I want you to know that you’re not alone. There are people out there that know exactly what you’re going through.

And for those who know someone with an invisible illness, I want you to know that it’s OK to not understand what someone is going. The best thing you can do for them is ask questions, be engaged, and be supportive.

Because every day is a struggle for them. No day looks the same. The same way no one’s journey is the same.

So here’s a look into my specific experience of living with an invisible illness:

I don’t have to be up until 7 a.m. but I woke up to a sharp, stabbing pain in my right knee. It feels like a 1,000 knives are stabbing at the same time every 30 seconds. And the stronger the stabbing pain gets, the more I worry about it intensifying at work.

To help combat the pain, I decide to put on my knee brace which helps keep my knee tightly in place so it doesn’t hurt so much to walk, stand, or sit. But once I get to work, I play a game of music chairs for the next eight hours.

So, I rotate between the three and switch my position every two hours. Surprisingly I’m able to focus on my work even though all I want to do is curl up in a ball and cry.

I just want the pain to go away.

Tuesday: Are You Serious?

It’s the next day and my knee has gotten worse. I can’t bend my right knee nor can I put any pressure on it. This is the moment when I realize I might be going into crisis. So, I decide it’s time to go to the emergency room.

I’ve been here for 3 hours and I’m finally seeing a doctor. First, I see the attending doctor who asks me why I’m there, examines me and orders bloodwork. Then, another doctor comes in and does the same. After about two hours, both doctors ask to speak to me again. But this time they want to know if I’m addicted to painkillers.

Dumbfounded, I say no. Not satisfied they ask me again. And once again I say, “No!” I’m starting to lose my chill and want to scream, “Are you freaking serious right now?”

Since a lot of people frequently go to the ER and complain of pain and sickle cell is an illness that causes severe pain, some doctors just assume we’re lying about our pain.

It’s the worst feeling in the world when a doctor refuses to believe you, especially when you suffer from an invisible illness.

Wednesday: Being an Advocate For My Illness

Because a lot of people are unaware of my illness, I have become accustomed to being an advocate for it. From nurses to doctors to my friends, I spend a lot of time informing people about the ins and outs of sickle cell.

Of course there are days when I don’t want to open up about my illness because I know I’ll hear things like, “But, you look healthy to me” or “Can I catch it from you?” (yes, I’ve been asked that before). But, most of the time I have no problem answering someone’s questions about sickle cell. Just know that my experiences don’t represent the thousands of other experiences with sickle cell.

But, if my story can teach someone about my illness and how it affects a person’s day-to-day life, then I’ve opened their eyes to the severity of the illness.

Again I wake up in pain. But, this time I also feel surrounded by a cloud of emptiness.

Sometimes I can feel so alone. I know there are other sickle cell patients out there. I’ve been lucky enough to meet a few, but because I don’t have anyone like that in my inner circle it can get really lonely sometimes. And today is one of those days.

Moments like this is when I miss my big brother the most. He had the severe form of sickle cell and passed away from complications of the illness back in 2008. And I wish I had someone like him around who truly understands what it’s like to have sickle cell or to suffer from a life-long illness.

Even though I have an amazing group of people around me, none of them truly understand the everyday struggles I deal with. So, this makes me isolate myself because I don’t want to burden them with my illness and instead of going to them for emotional support I bottle up my feelings until I explode. It’s that mental breakdown that makes me feel even more alone.

Truth is: It’s a vicious cycle I sometimes can’t break away from.

The pain has finally gone back to a manageable level and I no longer feel empty.

I’m starting to feel like my sassy little self again.I’m cracking jokes with friends and can genuinely smile without feeling like I’m faking it. I also feel like a weight has been lifted off my shoulders. These are the moments I cherish the most because it’s the only time I feel “normal.”

I’m just excited to get back to my normal routine. Unfortunately, I don’t know when I’ll have another crisis but I’m not too worried about it because for right now I just want to enjoy the beauty of today. 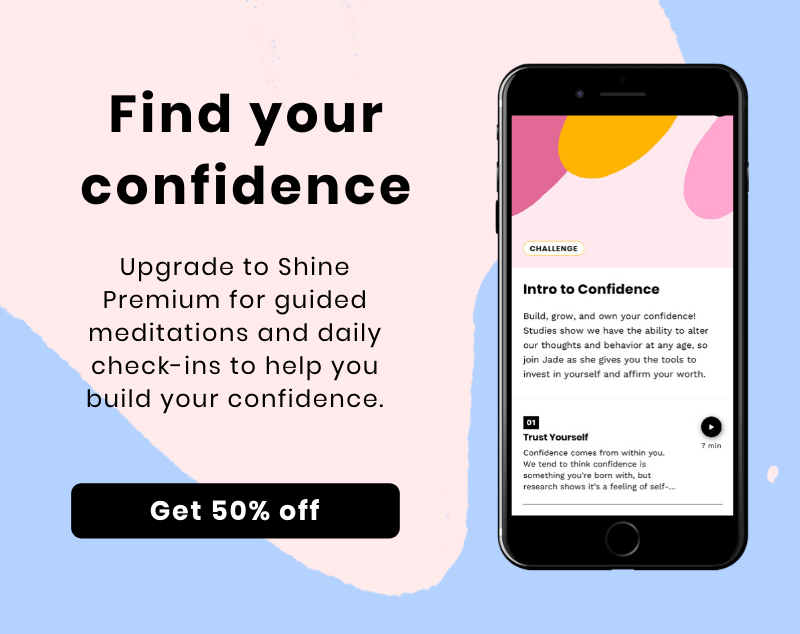 Ebony Bellamy
Ebony is the editorial intern at Shine. She has previously written for DoSomething.org and the Staten Island Advance. The key to her energy is loads of candy, cookies, and cupcakes.
Start your self-care ritual today
Listen to daily meditations and discuss how you’re practicing self-care with a supportive community.
Download now