What's the first thing that comes to mind when I say "Mister Rogers"?

One thing you probably don't think of: self-care.

But throughout the 912 episodes of Mister Rogers' Neighborhood, Fred Rogers actually taught us a lot about caring for ourselves.

No, he wasn't touting face masks or skin care regimens—but he constantly dropped words of wisdom about self-love and self-acceptance.

Won’t You Be My Neighbor?, the documentary about the man behind Mister Rogers’ Neighborhood, reminded me that he's kind of the OG self-care guru.

1. It’s Alright to Change Your Mind

Fred Rogers was all set to go to seminary—then he saw TV for the first time and thought it could be an amazing tool for distributing a positive message. He told his parents he wouldn’t become a minister right away (he did later become ordained) and followed his heart—straight into everyone’s living rooms.

You can probably hear his soothing voice say these words right now—they’re the same ones he used to close out every show.

“I like you…just the way you are.” - Mister Rogers

Repeating mantras, or writing them down and taping them around your home, can help create a new soundtrack for your life.

3. Don’t Be Afraid to Be Silly

Use a funny voice. Wiggle your eyebrows. Make a stuffed animal talk. It’s OK to be ageless. It’s OK to embrace your humor.

4. Brush Off the Critics

Saturday Night Live parodied Mister Rogers. So did plenty of others. He didn’t let it get to him—he just kept on being exactly who he was.

5. Necessity Is the Mother of Invention

If you’re feeling stuck on a project or hit a plateau, improvise! Mister Rogers wasn’t planning on using puppets in his show until a technical glitch made it necessary for him to think on his feet.

Since he was often sick as a kid, Mister Rogers had to make up his own fun, which made it easier as an adult to channel that essential part of himself.

Kids aren’t usually plagued with the same worries as adults. Even if it’s just for one afternoon, think about how it felt to play on the playground or sit and daydream. Then, maybe, do it.

Think about Mister Rogers: He walked in the same door the same way every day, exchanged his coat for a sweater, which told us all that we were going to have this relaxing time together.

When our lives feel in disarray, it’s usually because we’ve strayed far from the routines that give us comfort and stability.

8. Reflect on Your Day

At the end of every episode, he would sum up that day’s lessons in a song. So go on and hum a little tune while you’re doing the dishes.

9. Accept the “Flaw” You See in Yourself

And realize it’s not a flaw at all. As Mister Rogers said about children, “I don’t really think anyone can grow unless he’s accepted exactly as he is.” This testament holds true no matter your age.

“I don’t really think anyone can grow unless he’s accepted exactly as he is.” - Mister Rogers

11. Listen to Yourself and Your Surroundings

Perhaps one of his biggest lessons of all: “If you really want to communicate, you must first listen,” he said.

So open your eyes. What is your life trying to tell you?

Our lives are busy, sometimes chaotic little beehives. What’s the antidote? Leave it to Fred, who said, “I think silence is one of the greatest gifts that we have.”

Find a little patch of silence in your day.

Mister Rogers swam a mile every single day (at an “unhurried but deliberate pace,” according to the film). Slow and steady wins all the races—and clears your head in the process.

14. Build Your Own Community

Everyone who starred in or watched the show became a friend to Fred. Creating this sense of safety in a group can ensure you don’t feel like you’re going it alone.

Of course, you don’t have to produce your own TV show, but it can be comforting to start a club or weekly meet-up around your mutual interests.

All of them—even the negative ones—are “mentionable and manageable” as he used to say. So don’t feel like you always have to put on a happy face if you’re feeling blue.

You can still talk about the difficult aspects of your life and not feel like they have to be solved immediately.

Sometimes to feel better all we need is a little space. Take a cue from one episode, when Mister Rogers showed us all how long a minute was by taking a timer and setting it for a minute—and then did nothing but sit in a happy silence.

Remember when Mister Rogers would slowly and carefully feed his pet goldfish? Caring for something or someone other than yourself can give you a little boost—and get you out of your own head.

Lady Aberlin. Officer Clemmons. Daniel Striped Tiger. Henrietta Pussycat. Mister Rogers hung out the same friends day in and day out. It’s no wonder he was always in a good mood.

Want more Mister Rogers wisdom? Listen to our Shine Story, Radically Be Yourself, in our app to hear his best advice on staying true to you.

Read next: What Mister Rogers Taught Us: How to Radically Be Ourselves 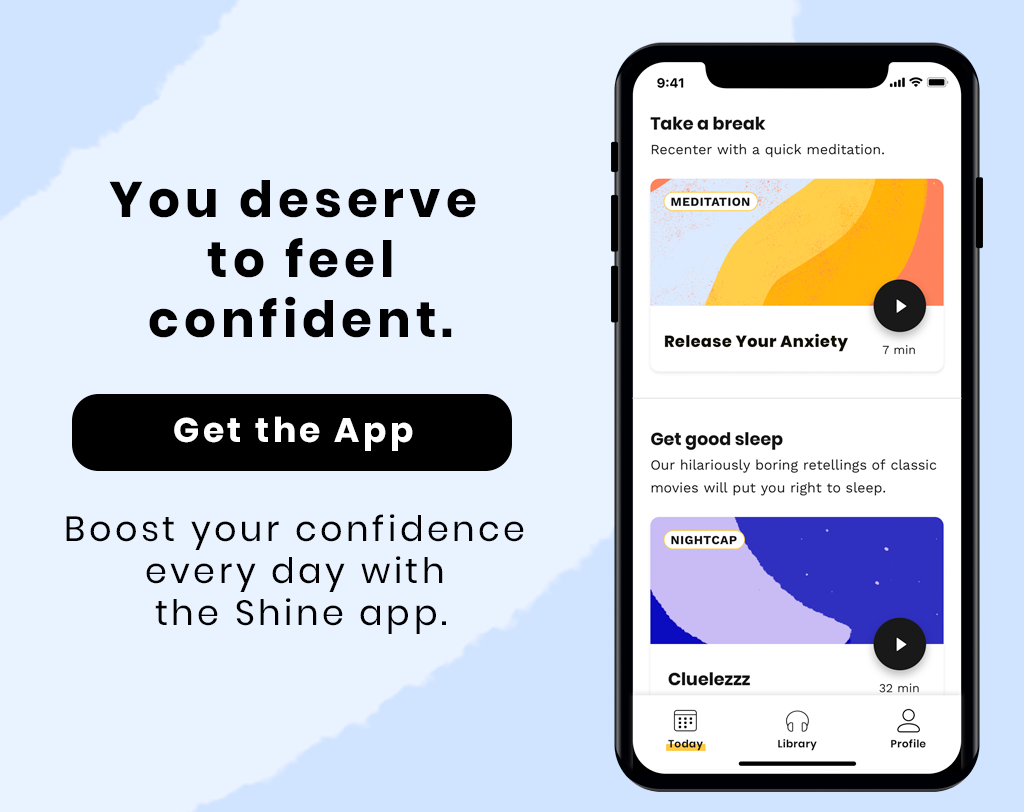