I’m five-foot-two, dirty blonde, and armed with the kind of voice that always makes baristas lean in to take my order.

I could teach a master class in sliding under the radar.

It’s served me well as a writer—I can eavesdrop with ease—but once I started my first corporate job, I found myself in a bit of a pickle. I’d walk up to my boss and have to clear my throat before she noticed me. In meetings, I could barely get a word in edgewise. I didn’t just feel small—I felt invisible.

Until one day, I headed to a shoe store downtown and wound up with a pair of heeled clog boots. They lifted me 3.5 inches off the ground, but they might as well have been stilts. As I test-walked them around the tiny store, I felt, for the first time in my life, big. Powerful. Present.

When I wore them to work, I could really feel their strength. People looked up when I walked—or, rather, clomped—by. My heavy, loud, clumpy shoes announced my entrance to a room like a doorbell, or perhaps a trumpeter. And as I stomped down a hallway or into a meeting, I realized, I felt different, too.

My shoes, as “Cinderella” as it might sound, gave me a sort of auditory power.

Sure, it was up to me to use that power to make my voice heard, but that seemed easier to do when heads just naturally turned my way.

Overtime, clog boots became my office weapon. When I had an important meeting, I slipped on my clogs. When I needed to vouch for myself in a performance review, out came the clogs. And when it came time to give notice and make a career jump, you know which shoes I wore.

To clarify, I know that the shoes didn’t solve all my problems. There are so many layers to workplace dynamics and to whom we pay attention—clumpy shoes or no clumpy shoes.

Instead, the clogs were a reminder. A loud, in-my-face signal that I had just as much right to take up space in my office, or on a crowded subway, or walking down the sidewalk as anyone else.

“I love the terminology of taking up space,” Joy Harden Bradford, Ph.D., psychologist and founder of Therapy For Black Girls, tells Shine. “You deserve to have your voice and opinions heard just as much as everybody else. We’re all equals.”

“You deserve to have your voice and opinions heard just as much as everybody else.”-Dr. Joy Harden Bradford

Still, we’re not always made to feel like equals. “A lot of times, as women, we’re socialized to play smaller, to yield the floor,” Bradford says.

Sometimes that’s because we don’t feel like our ideas are good enough, or that we have enough experience. Other times, it’s out of concern for others. You don’t want to make anyone else feel small by being, well, big. But according to Bradford, that fear isn’t quite founded.

Bradford now works for herself, but says that when she worked in an office, she took up space by saying what nobody else would want to say in staff meetings—the elephants in the room that needed to be addressed. “To me, that is taking up space: Making sure that my voice was used,” she says.

As a black woman, she says, choosing to speak up—especially on tough topics—wasn’t always the easiest decision. But those moments reminded her—and others—that she was a valuable part of the team.

“The room will get bigger—we can all take up space.”- Dr. Joy Harden Bradford

Taking up space can feel and be scary—but we all can find a practice or routine that makes us feel empowered to do it, like my clogs or Harden's meeting tactic.

Below, Shine members share their top tips for making themselves seen and heard. Read through them, and think about what will empower you to take up the space you deserve.

“I feel free to talk about things that my all male team might not really want to talk about. For example, last week when Beyoncé released Homecoming on Netflix, that was the first thing I said when I walked in and then continued discussing it for about 10-20 minutes. Great way to start the day!”

“Sometimes I think actions speak louder than words. If you live your values everyday and show others, you’re already speaking volumes.”

“Making eye contact with people as I walk towards them through hallways or on the sidewalk ... and even smiling sometimes. Head up, eyes alert, shoulders back. It makes me feel powerful, strong, and kind.”

“I believe my vocalness stems from the fact that my mother and grandparents were once immigrant refugees. They migrated from Cuba back in 1969 and felt as though they didn’t have much of a voice. Luckily, they raised me to be quite expressive and comfortable speaking up about a myriad of topics, so I don’t hold back thanks to what they taught me. I also find myself not holding back when it comes to speaking up solely on the idea that someone may need to hear what I have to share, that something may help them or spark a thought in them that they didn’t necessarily focus on before. I believe everyone can help each other if we’d be more open.”

"I’m a social worker. I assume that if I’m not AT the table... I’m ON it.” She makes sure she’s at the table by “networking, rapport building, social awareness, and fearlessness (to ask for the spot), (and) advocacy to make sure people know why I need to be there.”

“My struggle with my mental health and disordered eating have taught me a lot about how to take up space. I spent a lot of time trying to literally and metaphorically shrink out of space, to be as small and unnoticeable as possible. To combat that, I speak openly about my truths and mental health because I remember how important it was for me to hear other people talk about their own struggles. It’s important for me to initiate those uncomfortable conversations. When you take up space in a way that is open and inviting, you not only expand your own space in the world but also make room for others."

When you take up space in a way that is open and inviting, you not only expand your own space in the world but make room for others.

"I am a naturally loud person—and often take control of situations—so I love the strategy that was touted in the Obama White House where women would repeat what other women had said to emphasize and make sure they were heard…I look for opportunities to make sure I am raising the voices of other women and even challenge myself to do so when I don't agree 100% with what they are saying."

Read next: A Beginner's Guide to Taking Up Space 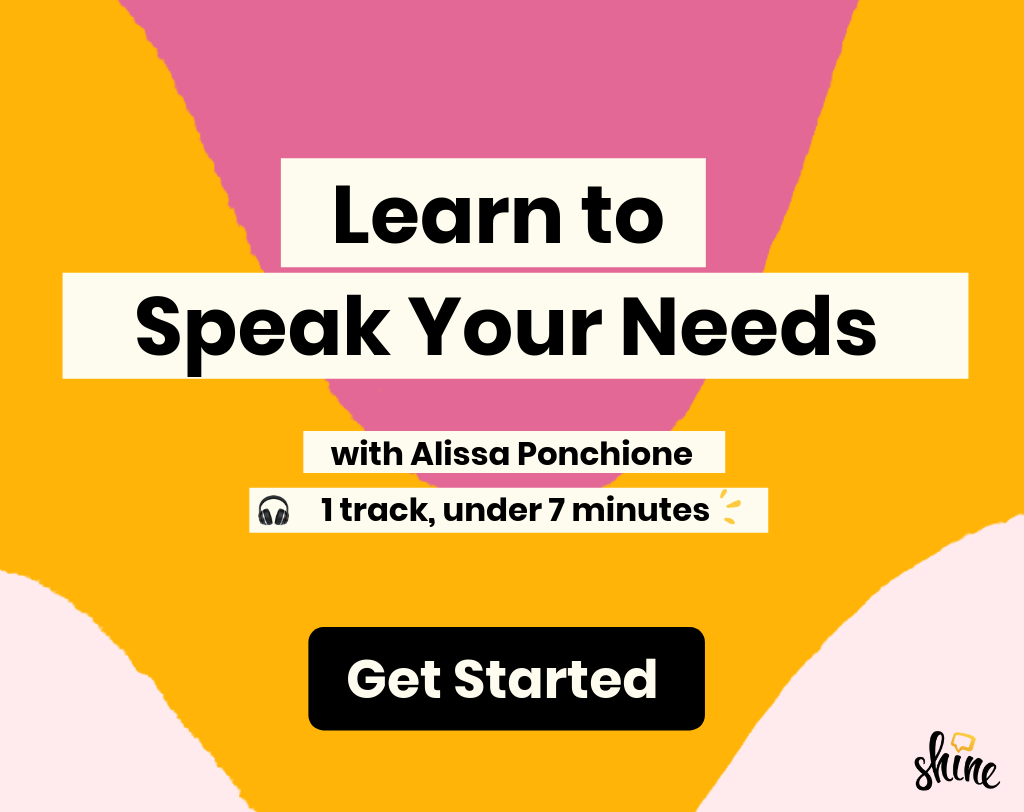