What If You Choose Bravery Over Perfection?

In the Seven Kingdoms, it’s Khaleesi who’s known as the Breaker of Chains. But here in America in 2019, we’re giving that title to Reshma Saujani, the founder and CEO of the nonprofit Girls Who Code and author of the new book and international bestseller Brave, Not Perfect: Fear Less, Fail More, and Live Bolder.

Saujani is making it her mission to break us free from the hold that perfectionism has over a lot of us—especially women—from an early age.

According to Saujani, our fear of failure or being seen as less than perfect is keeping us complacent.

“I talked to so many women on my book tour and for research for my book, and the common experience for so many women is the hold that perfectionism has on us from reaching our truest joy and potential,” Saujani tells Shine. “If we could unlearn perfectionism, we’ll be happier and see more leadership from women.”

'If we could unlearn perfectionism, we’ll be happier.'- Reshma Saujani

As Saujani points out, well-meaning adults often teach girls from an early age to be polite, ladylike, and accommodating. Girls are seen as something fragile that needs protecting. Meanwhile, boys are rewarded for showing up and showing out; whoever climbs the highest, plays the hardest, jumps the farthest is celebrated as superior. It reinforces the idea that girls should be careful and boys should take risks.

“With our boys, and when boys become men, bravery becomes second nature,” Saujani explains. “So they’re comfortable asking for promotions they’re not qualified for. They’re comfortable asking for outsized raises. But for the women I know, because we have not been raised in the same way, we are risk-averse. Perfectionism is holding us back. You see this at work; women won’t apply for a job unless they meet 100 percent of the qualifications.”

Trying to be perfect doesn’t just hold us back in our careers—it also has a significant impact on our mental health. Studies have shown that perfectionism often correlates with depression, anxiety, and other mental health problems. “So many of us have something we wanted to do: start a business, run for office...but we convince ourselves out of it,” Saujani says. “And then we see someone else doing the very thing that we wanted to do, and we’re left with regret and envy. It eats us up inside.”

Luckily, There Is an Antidote: Bravery

Saujani saw her life change the moment she embraced failure instead of fearing it.

“I’ve run for office twice and I lost twice,” Saujani says. “But if I didn’t lose that first race, I never would have seen that girls weren’t coding and that there needed to be an intervention and movement built around it, and I never would have started Girls Who Code.”

Since its founding seven years ago, Girls Who Code has helped more than 185,000 girls in all 50 states learn how to code, making major strides in closing the gender gap in technology. For Saujani, she’s proud to say the success was born out of failure.

“I learned I could fail at the thing I wanted for my entire life and be OK—and that led me to living my life very differently,” she says. “Bravery is a moonshot. Ninety percent of the time things won’t work out. But you don’t sit with that coulda shoulda woulda—and that’s very freeing.”

“I learned I could fail at the thing I wanted for my entire life and be OK—and that led me to living my life very differently."- Reshma Saujani

That “bravery is a moonshot” idea doesn’t only apply to the major moments in your life, like making a career switch or asking your boss for a big raise. It’s actually the smaller, everyday acts of courageousness—speaking up in a meeting, introducing yourself to someone you admire—that can have the biggest impact.

“I know I tell my bravery story about running for office,” Saujani says. “But it's really the everyday stuff that has made me more courageous and happier.”

Here, five ways you can be braver now.

1. Prioritize Your Own Needs

“I think a lot of us have been raised to be people pleasers and put other’s feelings above our own,” Saujani says. “I can’t tell you how many times I'm in a room and talk about how we postpone our own doctor’s appointments and everybody’s nodding. We’ve gotten to a place where we take care of others, but we don’t take care of ourselves.”

It shouldn’t feel “brave” to take care of your own basic needs, but for so many of us—especially caregivers—it can.

Know this: Summoning the courage to prioritize self-care can help you not only feel better, but be better for those around you. After all, you can’t help anyone—least of all yourself—if your gas tank is running on E.

Your strengths are what make you you. Reflect on them today with your 7 Days to Resilience challenge, now in the Shine app. Here's a sneak peek before you get started:

2. Let ‘Them’ Figure It Out Sometimes

“I think one myth of perfectionism is ‘If I’m not perfect, everything will fall apart,’” Saujani says.

This can play out in a number of ways—spending hours perfecting those brownies for the bake sale, volunteering for extra responsibilities at work when your plate is already overflowing, spending too much time and money to host the perfect dinner party when all you really wanted to do was order pizza.

Saujani’s been there. She was ready to get back to her morning workouts after she had her son, but that was also the time her dog liked to be walked and her son was waking up. She felt guilty, like spending what little free time she had on herself made her a “bad” mom. Then it dawned on her: Her husband always made it to the gym and had time for the activities he enjoyed. Why shouldn’t she?

“Finally I got the courage to just walk out the door and be like ‘you guys figure it out,” she says.

While researching her book, Saujani conducted focus groups with a diverse group of women between the ages of 18 and 70. She learned the majority of them shared a common belief: the idea that polished equals perfect.

“So many women felt like if my hair and makeup looks perfect, if I ask the perfect question, I will be perfect,” Saujani says.

She saw this scenario play out again and again while she was on her book tour. The Q&A section would come around and every time, the first 10 or so people to raise their hands were men.

“And I can’t help but notice the women scribbling down their questions, perfecting them in their mind,” she explains. “Then they never get the chance to actually ask.”

In short: Sometimes good enough is good enough. Don’t let a desire to get something exactly right hold you back.

Sometimes good enough is good enough. Don’t let a desire to get something exactly right hold you back.

4. Get Out of Your Comfort Zone

If you're a perfectionist, chances are you feel most comfortable sticking to the things you know you’re good at. But Saujani warns that could come back to bite you.

“I think so many girls, since we’ve been raised to be perfectionists from the time we are young, have confused the things we’re good at for the things we like,” she says. “So sometimes we wake up and are like ‘Wow, I’m in this job that I actually hate.’”

It’s natural to gravitate toward what feels familiar and safe, but being brave enough to put yourself out there and try something new from time to time—even if you know you won’t be perfect at it—could bring unexpected joy.

For Saujani, that’s going to a Beyoncé-inspired dance class even though “I’m not 28 anymore, I can’t go in there and do my formation,” she jokes. For you, it might be signing up for drum lessons or volunteering on a local political campaign.

5. Instead of Practice Makes Perfect, Practice Being Imperfect

After a lifetime of being conditioned to value perfection, it’s hard to let that idea go—even if we want to. That’s why Saujani encourages the women she meets to practice being imperfect.

“A lot of women spend so much time rereading and rewriting our emails,” she says. “The idea of sending an email with a typo in it is (gasps). We immediately go from ‘I made a mistake’ to ‘I’m stupid’ to ‘I’m going to get fired.’ And so part of the exercise of sending an email with (an intentional) typo in it is to recognize that it does not matter.”

The more you get comfortable making mistakes—whether it’s a typo in an email, cooking something that might not taste ready for the The Great British Bake Off tent, or sending a kid to school with mismatched socks—the more you’ll start to realize that your worth isn’t tied to being perfect. There’s space for you to be imperfect, and that’s a brave space to live in.

There’s space for you to be imperfect—and that’s a brave space to live in.

“All the things in your life that you spend time perfecting? It doesn’t matter,” Saujani says. “The worst thing you think is going to happen is not going to happen.” 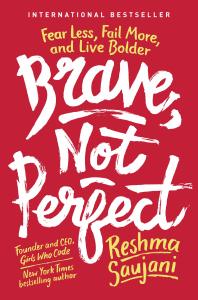 How do our members in the LGBTQIA+ community practice self-care, and what resources/conversations do they feel are missing? If you’re open to sharing your thoughts, please take a few minutes to answer a few questions in this survey. 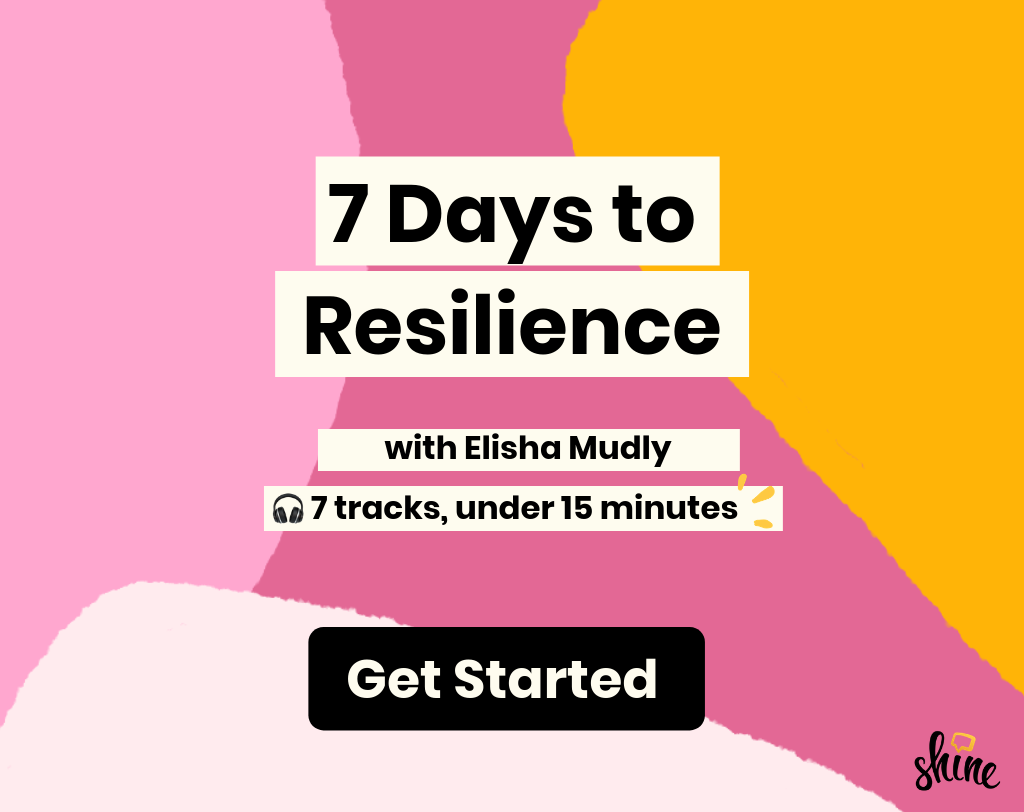