The Mental Toll of Being 'Twice as Good' in the Workplace

Martha Tesema
This post is brought to you by Shine at Work.

"You have to be twice as good to get half as far.”

It’s an adage that rings familiar for too many people—especially those in marginalized groups—and it means pretty much what it says: Having to go above and beyond to simply get the same level of respect or recognition as others.

It sounds harsh, but the “twice as good” sentiment was echoed to me by my parents, who understood that, as black immigrants, life would be a constant uphill battle filled with proving themselves in the U.S. because of the biases many people carry.

Serena Williams has referenced the need to be “twice as good,” and former First Lady Michelle Obama made it the focal point of a commencement speech once, too.

But it’s more than just an anecdotal lesson passed down from generations to generations.

According to The Atlantic, research shows that small mistakes made by black employees will undergo more scrutiny than their white counterparts—which can lead to lower performance reviews, job stagnation, and even lower wages than their peers.

And even when black employees do perform well, the research shows they still face discrimination. "Even in instances where the productivity of black workers far exceeded their white counterparts, there was still evidence that discrimination persisted, which could lead to lower wages or slower promotions," according to The Atlantic.

These insights, unfortunately, give reason to the "twice as good" mentality that's passed down in marginalized communities. But what's often not discussed: How the lived reality of that adage is one of burnout and exhaustion.

“[Working twice as hard] definitely puts a lot of unnecessary stress on you,” Joy Harden Bradford, Ph.D., a psychologist and founder of Therapy for Black Girls, tells Shine. Because of it, “people can get caught up in perfectionism, which comes with anxiety,” Bradford explains. “Managing stress when you feel like you have to be ‘twice as good’ is a foreign concept sometimes, so it definitely can lead to a host of other mental health concerns if you’re not paying attention to it.”

Bradford gave an example of how that inequity may play out in everyday life: “You may be at a meeting and a black woman will make a comment and it’s overlooked—but then a white man says it, and everyone will be on board,” she says.

Managing stress when you feel like you have to be 'twice as good'...can lead to a host of other mental health concerns if you're not paying attention to it.- Joy Harden Bradford, Ph.D.

That "twice as hard" pressure also looks different for others depending on their intersecting identities. It’s different for first generation immigrants, members of the LGBTQ community, and more. And while the sentiment usually is experienced primarily in the workplace, it also moves beyond the 9-5 and can impact people as a parent, partner, or more.

In order to understand how this adage actually impacts people a bit more, I asked the women of color in my own life how they navigate the burden of having to be “twice as good” while caring for their mental health in the process.

For Cai, the lesson happened at a young age. “My mother and I definitely had the talk about the notion of being twice as good,” Cai, a documentary filmmaker based in Chicago, shares. It happened around the time when she transitioned from a majority black and brown school to a predominantly white middle school.

“We then had the talk again when I told my mom I was gay,” Cai explains. “As a mother, she was concerned about how these various identities would affect my earning potential once I graduated college and the discrimination I could potentially face professionally.”

Step away from pressure and remind yourself of your value with the You Are Enough meditation, now in the Shine app. Here's a sneak peek:

Samra, an associate creative in New York, says she regularly falls into burnout mode because of the pressure to be "twice as good." “I’m constantly overextending myself, not only because these are difficult clients, but because I have to prove that I can handle them. I’m not allowed to slip up ever,” she says, especially considering the tech and finance industries she works within are not diverse.

Solutions can feel hard to pinpoint, especially when this adage feels integral to the nucleus of American society, Samra explains. But she’s hopeful that “as we become a society that addresses these issues more and more, I'm optimistic about how these will shift in the future.”

While that future might feel far away, there are small ways you can protect yourself from burnout if you’re under pressure to be “twice as good.”

Check In With Yourself

Whether it’s in the Shine app (which offers a daily mood check-in) or on a piece of paper, try checking in with yourself at the beginning of each day to see how you are feeling. Are you on the brink of burnout? Are you overwhelmed by how much you’ve taken on for the day?

Recognizing any feelings that are bubbling up at the surface is the first step in understanding how to work through them. Once you do recognize that feeling, revisit your notes throughout the day and notice if there are any small ways you can let go of tension.

Bradford also tells her clients to take a realistic look at the benefits they see—or don't see—from working twice as hard.

“We get caught up in the idea that we need to [be twice as good] but then I ask people, ‘Are you really seeing any benefit from that?’" she says. "Because if you're working really hard and people are still not respecting you, is there a point to this?”

Asking yourself about the benefits you may or may not be experiencing because of your workload is a great way to determine if you’re in an environment that’s healthy for you.

“Assess your workload and try to fight against the voice that tells you you have to take on more stuff and you have to do everything—because you really don’t,” Samra says. “It’s only going to exhaust you.”

“For me, [caring for my mental health despite pressure] starts with setting more boundaries at work and being more protective of my energy,” Samra says, crediting her co-workers for giving her the space to do that. “Now, I have a better understanding of when to say no—and that I should say no—and how to lean on other people for support.”

Managing what you take on not only safeguards your workload and mental health, but also sets reasonable expectations about what you’re able to do—ultimately creating a better work environment for everyone. Consider boundaries your best friend.

Burnout is sneaky—and doesn’t often just show up overnight. “If you see a fire that’s raging, it’s started somewhere with a small ember, and that’s a bit like burnout,” Anna Rowley, Ph.D., a psychologist and millennial wellbeing expert, tells Shine.

One way to protect yourself from burnout is to create small ways to unwind every day.

“When you take steps to decompress every day, you’re kind of cutting back on the amount of tension on you’re building up,” Samra says. “Work might not stop being stressful, but it’s up to you to check in with your body and mind and do things that will help you to calm it down as much as you can.”

Taking a walk is one way she does that, as well as immersing herself in new activities. Finding hobbies that allow you to focus on working towards a goal at your own pace—“with no performance review involved,” Samra mentions—can also help you release some of the tension you may feel.

There’s a lot of power that comes when you validate your own experience—especially if you’re feeling frustrated, hurt, or tired. Regardless of what your identity is, finding spaces to reflect on how you feel and validate your emotions can help you sit in them and, eventually, work through them.

Finding spaces to reflect on how you feel and validate your emotions can help you sit in them and, eventually, work through them.

That may mean gathering with people who share a similar experience of having to be “twice as good.” If you don’t have a group of people IRL to share with, try finding an online forum—or even turning to pop culture.

“I remember having so many conversations with other black queer women about the Master of None Thanksgiving episode, and how they too had conversations with their mothers insinuating that they would actually have to be three times as good,” Cai says.

Seeing that Emmy-winning episode—which was written by actress Lena Waithe based on her own coming out story—was powerful for Cai. The storyline reflected her experience and helped her feel validated in her own life.

Remember Your Differences Are Your Strengths

If you do feel the need to work extra hard to prove yourself in the work environment, it can be a hard habit to reverse. But don’t forget to remember that your identities are also your strengths. They can help you kickstart a mindset shift that may make boundary setting easier in the long run.

“It's interesting because all the things that make me 'other' are actually what I think make me a great producer and [director],” Cai says. It's very important to me that I am able to be my full self and not feel like I have to hide my opinions or thoughts and most importantly that my viewpoint is valued.”

Reciting a mantra or listening to a meditation to remind yourself of your power can help remind you of your strengths when you need a boost.

'All the things that make me 'other' are actually what I think make me a great producer and director.'- Cai

While there may not be concrete solutions to the "twice as good" pressure, there are ways you can care for you in the midst of it. A great first step: Giving yourself time and space to remember that who you are is powerful and that you are enough.

Read Next: Why We Need to Talk About—and Recognize—Representation Burnout 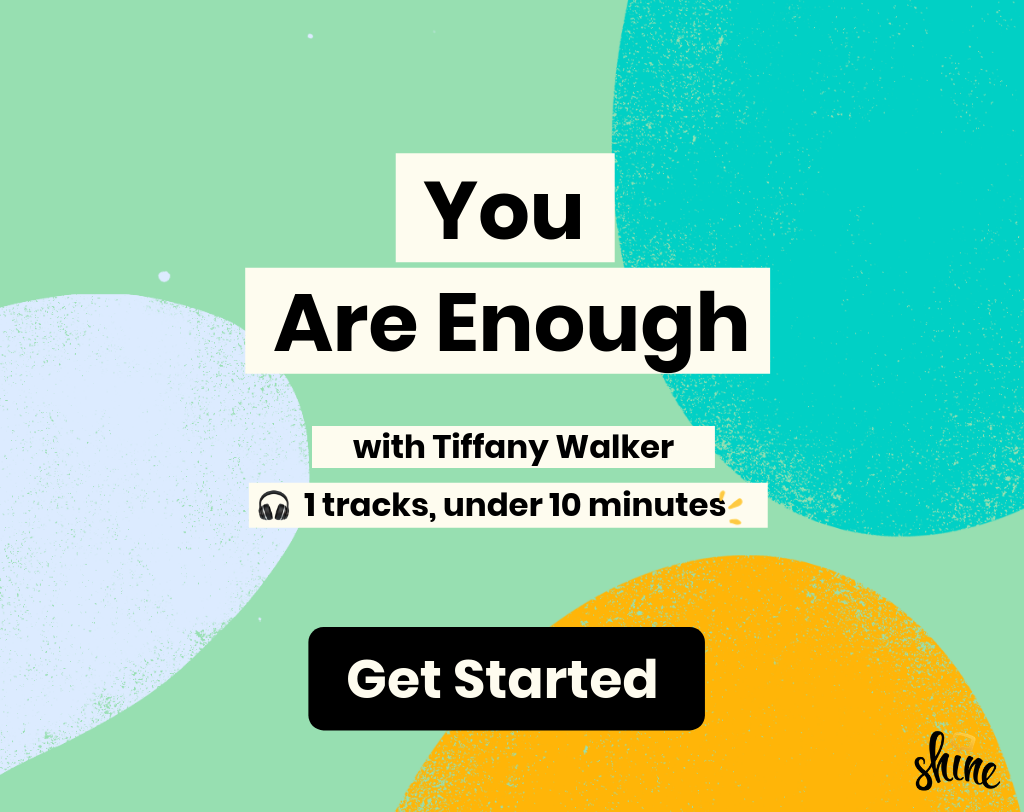