Asking for help is hard. Sometimes excruciatingly so.

Here are just a few things I’m embarrassed to admit have happened because I was too reluctant to utter one of my most dreaded phrases: “Can you do me a favor?”

●︎ Watched my phone battery sink down to zero because I didn’t want to be a bother by asking if anyone had a phone charger. (What if they don’t? What if (they) need it?)

●︎ Rode three subway stops in the wrong direction because I didn’t want to ask the people around me if the train was going uptown or downtown. (She’s reading a book and he’s listening to music and besides, it’s my fault for rushing on to the train without looking where it was going! This is my punishment!)

●︎ Stalled out on a few writing projects because I didn’t want to ask my friends to read my early drafts and give feedback, despite them actually offering to do so. (My friends are busy people! They probably didn’t mean it! They don’t need one more thing on their plate!)

These are just a few minor cases, but the issue can run a lot deeper. It’s often hard to ask for help—or a “favor,” as we often position these asks—because we don’t want to inconvenience people in an already busy world. Research has shown that people often wildly overestimate the number of people they think they’d have to ask for help before someone would say yes to their request. But in reality, strangers or acquaintances are actually much more likely to say “yes” to a small favor.

Asking for help, no matter how small, can make you feel vulnerable. In a sense, you’re exposing some small weakness—and that’s not a bad thing—by saying, “I need something. Can you please help me?”

Asking for help, no matter how small, can make you feel vulnerable.

And for someone who wants to feel in control of their life and their actions, there’s nothing more nerve-wracking.

But here’s the thing: Asking for help can actually benefit you—and the people you’re asking. In fact, one study revealed that asking for help actually makes you appear more competent to other people. The person who’s being asked gets a little confidence boost, which makes them think more highly of the person doing the asking (that’s you!).

Plus, when you do open yourself up and ask for help, you’re able to connect with your friends and loved ones on a deeper level. Because guess what? You don’t have everything under control! Sometimes you need another person’s wisdom, guidance, or, yes, even their iPhone charger to get on with your day. And that’s totally OK. You’re allowing the other person to feel needed and useful, too.

Sometimes you need another person’s wisdom, guidance, or, yes, even their iPhone charger to get on with your day. And that’s totally OK.

But it's easier said than done—getting the words "I need help" from your brain to your lips can still be tough. Here, a few tips that will make asking for a hand easier:

1. Provide a Reason With Your Request

Research shows that backing up your ask with a reason—whether or not it’s super urgent or even makes sense at all—increases the other person’s likelihood of saying “yes.”

In one study, experimenters waited at a copier machine and when somebody went to make copies, the experimenter interrupted and asked, “Excuse me, I have 5 pages. May I use the Xerox machine?”

Backing up your ask with a reason increases the other person’s likelihood of saying 'yes.'

Think about it in the context of your own life. If you’re standing in a long line at the airport and someone walked up and said, “Can I jump to the front?” what would your initial response be? Hey, we all gotta stand in line, friend! But if someone ran up to the line and said, “Can I jump to the front? I’m about to miss my flight to go see my grandpa’s 90th birthday!” you’re much more likely to let them pass. Reasons matter!

If you really feel uncomfortable asking for help, it might make you feel better to take a page out of entrepreneur Gary Vaynerchuk’s playbook. In his book Jab, Jab, Jab, Right Hook, his advice is to constantly give to other people with zero expectation in return. Then, when an occasion comes up and you do need help, you can ask without feeling like you’re popping up out of nowhere begging for a favor.

The key, though, is to genuinely give without expectation. Don’t anticipate that one day you might need something from another person—you might not. Plus, doing good is always good.

3. Consider Your Own Favors

Chances are you’ve helped someone out recently. Maybe you introduced two friends about a potential job opportunity or maybe even just held the elevator door open when someone looked like they were in a hurry.

Think about how you felt during those moments.

Probably not. You might have even got a little endorphin rush from your small act of kindness—and that’s because helping someone else rarely feels like an inconvenience. This should help you hopscotch past your hesitation. Just remember how you’ve felt when you’re on the other side.

I’ve been practicing asking for favors more often, and I have to say—it feels incredibly good. It feels reassuring to know someone—or many someone’s—are rooting for you and are eager to help, and that eventually, hopefully, you can pay them back in kind.

If you're not sure where to get support and/or need immediate help, you can text Crisis Text Line directly at 741741—it’s available 24⁄7, it’s confidential, and it’s free.

Love journaling? We’d love to hear how journaling plays a part in your self-care routine. Take 2 for this quick survey? 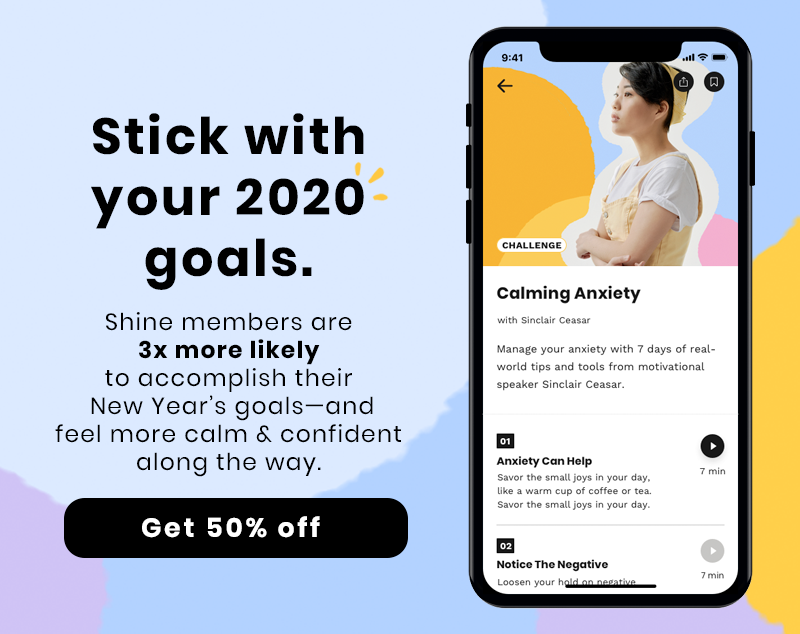