How I Learned to Trust My Dopeness

I'm not good enough. I’m not smart enough. I don’t deserve to be here. They’re going find out I’m a fraud.

Now, let’s get something straight: This isn’t a confidence issue. To be honest, I’m one of the most confident people I know. And that’s not a #humblebrag.

When the hiring manager for my current role asked me to rate myself on a scale of 1 to 10 during our phone interview, I quickly and unabashedly said “12—and this is why...” Essentially, I’d referred to myself as the Olivia Pope of nonprofit public relations. And if that’s not confidence, then I don’t know what is!

But in the weeks leading up to starting my new position, I began to panic. I’d just switched from full-time journalism to nonprofits only three years prior—surely I’m not qualified to be running communications for a national organization! I truly believed that I was a fraud and that the people who’d hired me would figure me out.

I truly believed that I was a fraud and that the people who’d hired me would figure me out.

I found myself, yet again, face-to-face with impostor syndrome.

First coined in the late 1970s by clinical psychologists Pauline Clance and Suzanne Imes, the term impostor syndrome is described as “the phoniness in people who believe that they are not intelligent, capable or creative despite evidence of high achievement.”

And according to the International Journal of Behavioral Science, 70 percent of millennials experience self-doubt at work. I imagine that number is even higher for women of color.

As New York Times journalist Kristin Wong alludes in her recent article about impostor syndrome, this phenomenon tends to hit minority groups harder as “a lack of representation can make minorities feel like outsiders,” which I can certainly attest to.

What I didn’t realize before I began researching impostor syndrome for an upcoming book is that celebrities are not immune to it either. Even the talented, intelligent famous women we’ve all come to know and love have fallen victim to impostor syndrome at some point in their careers.

Even the talented, intelligent famous women we’ve all come to know and love have fallen victim to impostor syndrome at some point in their careers.

This is Dr. Maya Angelou, y’all. So if she suffered from impostor syndrome, then surely there’s no hope for the rest of us.

In September 2016, award-winning actress Lupita Nyong’o shared: “I go through (acute impostor syndrome) with every role. I think winning an Oscar may in fact have made it worse. Now I’ve achieved this, what am I going to do next? What do I strive for? Then I remember that I didn’t get into acting for the accolades, I got into it for the joy of telling stories.”

'I go through [acute impostor syndrome] with every role. I think winning an Oscar may, in fact, have made it worse.' - Lupita Nyong’o

So what in the world are us mere mortals supposed to do when confronted with impostor syndrome?

In my many brushes with impostor syndrome, I’ve found a few things that can help quiet—or, at least clap back at—that “I’m not qualified for this” voice:

Whenever I’m feeling low or start to second-guess my awesomeness, I refer to my “feel goods” folder. It’s a collection of emails (both personal and professional) in which someone has either complimented my work or said something really nice about me.

Not only does it serve as evidence of my outstanding work and credentials come performance review time, but it also helps to interrupt the flow of negative self-talk, which we’ll get to later, with positive thoughts.

It’s pretty hard for your brain to focus on something bad AND good at the same time. And who couldn’t use a pick-me-up every now and then full of positive vibes?

2. Write a Letter to Your Inner Critic

Have you heard the way you talk to yourself lately? That negative voice constantly telling you that “you can’t do this,” “you can’t do that,” “you’ll never be good enough”?

Well, it’s time to nix the negative talk. Name that nagging voice if you have to (I refer to mine as Nancy … because she’s so negative and also because I love alliteration) to make it feel a little less threatening.

Name that nagging voice to make it feel a little less threatening.

After all, that voice is only there to protect you (or so it thinks) from fear and failure. But it’s also holding you back from taking the first step or the next step in making your dreams a reality.

So thank her (or him, or them) for its concern in a nice goodbye letter...and then let it go. Negativity has no home here.

3. Accept Impostor Syndrome Is Along For the Ride

If anything, it only intensifies the higher we climb the corporate ladder, the more accolades we earn, the more recognition we receive.

Because now the stakes are higher. Because there’s more to lose if, in fact, “they” discover that we’re frauds. That we don’t “really” belong here.

So once you’ve accepted that impostor syndrome is something that will rear its ugly head every now and then and again, you’re already on the road to recovery.

After I’ve called out Nancy—aka my inner critic—I replaced her nagging voice with a more mindful mantra: “Trust your dopeness.”

The saying first came to me after a pep talk with a fellow blogger before I was set to participate in a Twitter chat where, you guessed it, I felt less than qualified.

In a text message I’ve since saved, my friend told me: “There are no rules to this. You define your own success, you define the lifestyle you want to live, how you do your work, what you do with your mission, etc. ... You can only get to your next level by being you, not anyone else.”

In the years since I originally received that message, I call it to mind whenever I begin comparing myself to other bloggers and influencers. And when I’m feeling especially anxious about a new situation, whether it’s starting a new job or preparing for a speaking engagement, I remind myself that I’ve got this. No one else is me and that is my magic, my gift to the world.

So, trust yourself and trust your dopeness. Now go forth and kick ass.

Read next: 6 Ways to Define and Own Your Power) 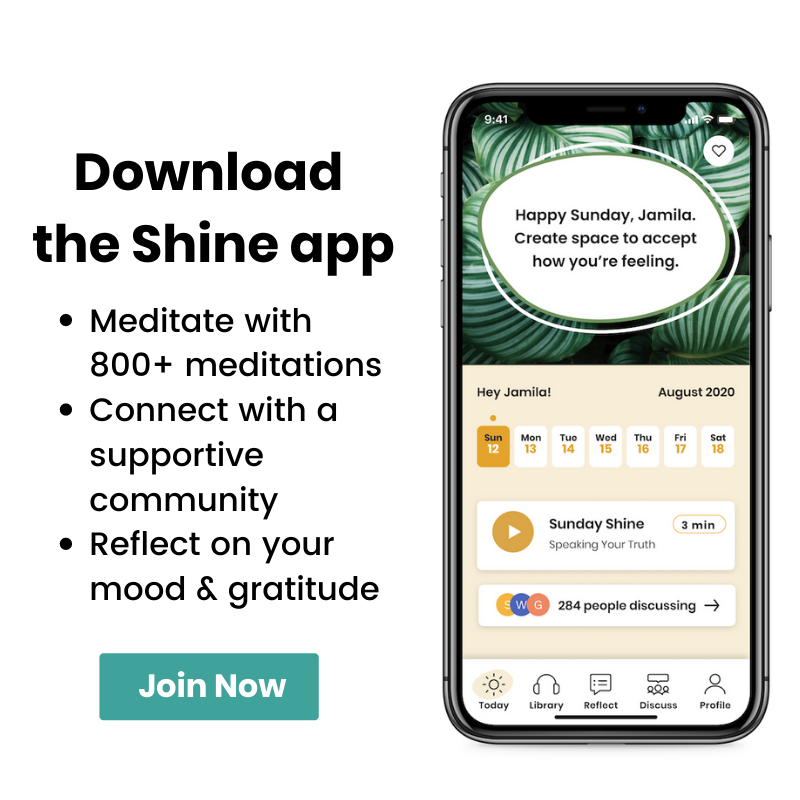