It’s a vicious cycle—and trust me, you’re not alone.

I would have given anything when I was at the depths of feeling lost in my career. I thought that reaching my end-all-be-all goal would be enough to give me direction in my life—but when I met that goal and realized I was still just as miserable as before, the lost feelings were even more consuming.

If you're feeling lost, you know firsthand how incredibly disorienting it can be.

But I’m proud to say I climbed out of feeling lost, and it didn’t happen with some big life shift. What I learned: You don’t have to have it “all figured out” in order to start feeling better right now. You can begin to feel less lost immediately. And the secret to feeling like you have more direction in your life is simply to take a small action. It won’t fix everything—but it’ll help you feel your power again.

That action will help build a deeper sense of self-belief, which is like having a compass in this entire figuring out where you’re going thing. And those small actions can start today.

1. Identify 3 Things That Give You Energy

When I was at the depths of my lost feelings, I asked myself where energy in past years had come from. The answer was crystal clear: women’s issues and writing. So, I signed up for a writing class, which is where I found a rocketship opportunity that completely changed my whole career. That never would have happened if I hadn’t made the simple decision to enroll in that class and do the two things that gave me energy.

Taking inventory is a powerful momentum builder in creating your path forward.

Look back on the last year, for example, and see if you can identify the three things that gave you the most energy. Taking inventory is a powerful momentum builder in creating your path forward.

2. Ask Yourself This One Question

”What’s the absolute smallest thing I can do to put my energy into action today?”

Maybe you’re super energized by public service but you don’t know where to start. Committing to one hour of research of organization that could help educate you is something small. Or, maybe you’ve always been super interested in interior design. Sending a single email to your family friend to see if they’ll talk to you about the career is something small. Perhaps you’ve always wanted to write a blog. Buying the domain name is something tiny that you can do today.

The pursuit of direction doesn’t happen because we figure out our end destination. It happens because we’re able to figure out what absolutely small plan we can make today, and every day after it. When it’s small, it’s manageable. When it’s small, it’s doable. And small thing after small thing creates that path toward where you’re going—even if the destination is unclear right now.

Small thing after small thing creates that path toward where you’re going—even if the destination is unclear right now.

3. Be the Most of You—Not the Least of It

In order to get going on the right path for yourself, you need to imagine the highest possible expression of yourself. Now, I know that this can be an amorphous trope that’s easy to spout out and difficult to actually put into action. So, here’s a quick exercise for you: Think about three things you have always felt like you were supposed to change and ask yourself what it might look like to stop trying to change those things and magnify them instead (barring any traits that, you know, would make you a non-decent human). Maybe it’s your humor or your relentless optimism or your cautious calculating. Don’t be less of them. Don’t fight them. Be more of them—and see what happens.

This type of living is often referred to as authentic living, which has been shown to contribute to greater happiness, higher self-esteem, and more positive emotions.

While so often we’re always told that it’s “an inside job” (and often, IT IS), external feedback can be powerful in helping us decide which step to take first. So, gather your top five cheerleaders of humans and ask them where they see you in five years. Ask them what your unique values are and even what might be holding you back (there’s a full rundown of how to set up this survey in my book You’re Not Lost. When we start to see what our people see in us, creating the path in the face of our own unknown becomes even easier.

When we start to see what our people see in us, creating the path in the face of our own unknown becomes even easier.

Remember, you’re creating the path as you’re walking, not before. It won’t always be certain. And you might feel lost sometimes. But you’ll always be finding your way. You’ve got you, which is all you actually need. Trust yourself, follow these steps, and let the lost feelings slowly fade away.

Adapted from the book "You're Not Lost: An Inspired Action Plan For Finding Your Own Way" by Maxie McCoy, now available. 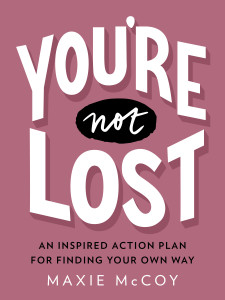 💛
Want more from Maxie? Try her seven-day Love Yourself challenge in the Shine iOS app.

Read next: How to Trust Your Gut No Matter What)

Maxie McCoy
Maxie McCoy is a writer and speaker obsessed with giving women the tools they need to believe in themselves. She's the author of You're Not Lost, a tough-loving guide to figuring out your next steps and believing in yourself enough to take them.
Start your self-care ritual today
Listen to daily meditations and discuss how you’re practicing self-care with a supportive community.
Download now